4 Reasons You Would Remain Average Financially 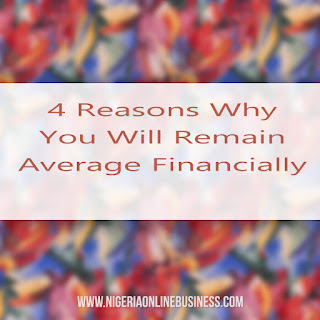 I am not trying to be negative in my perception of people, but there are several mindset – especially financially, that leads to struggling with money – or in most cases, you roam on the average.

As a young entrepreneur who has coached and mentored several people to make money without living the comfort of their homes, I have seen many mindsets that made them remain average.
These reason I am about to list might not sound like a good reason to those who already have these mindsets – because they already have it, but digging deep, it is a financial killer.
Several millionaires who have written several books have written about it, and I am just trying to highlight it once more to those who may not have had any opportunity to read such books.

Are you looking for the reasons why you would remain financially average? See them below

Single Source of Income
If a politician who earns millions still has the vision to setup several establishments that would help rake in money, what about you who earns some few thousands on monthly basis?
Rich people become rich by spending their wealth to open other sources of income. Poor people remain poor by protecting their money and buying things for pleasure.
60% of the Nigerian population belongs to the former. They are cold feet to invest in profitable ventures. The reason for this leads us to reason number 2 that will hold you from becoming rich.
Fear of failure
Thomas Edison said he hasn’t failed 10,000 times, he only found 10,000 ways that won’t work. The fear of losing money makes average people to create an “Imaginary castle” and live in their own world of wealth.
They prefer managing the small amount they earn than the thought of losing their money. Personally I failed 5 times and lost huge amount of money before I found a modelthat worked.
When it comes to businesses like affiliate Marketing, I consider myself a king because I worked hard to get there. Is fear holding you back from becoming rich? Then the 3rd reason might be what the cause is.
Not Willing to Learn
Smart people are those who utilize existing business models to create and make money for themselves. Why should you start from the ground to know how a model works when you can learn from someone successful already?
Business moguls like Bill Gates, Robert Kiyosaki, Donald Trump, and etc have taken their time to write materials that have helped upcoming entrepreneurs create successful businesses.
If Billionaires like the above can write books, sell, and people buy and make money, why can’t you take the same route?
Doing trial and errors in this 21stcentury is foolishness when several materials like the one I created is there for you.
All you need to do is copy someone’s method, modify and tweak it, then take action and make money.
Failure to Take Action on Productive Ventures
A rich man said “ideas are like kites; whoever catches it flies with it”. The moment you procrastinate about taking action on an idea shared, someone else somewhere has gotten the same idea, taken action and is making money from it.
If you want to remain in your average financial state, keep procrastinating on any idea shared. Continue to blame the government, and everyone for your financial state.
The power to take action is in your hands, it takes discipline, hardwork, and persistence to make money from the millions residing on the internet. If I can make so much money from several online businesses, you also can do it.
See you at the top!
2018-03-19
sadiqduniya
Previous: 4 Online Businesses With Low Startup Capital That Will Make You Rich
Next: 7 Reasons Why You Should Be Rich